Peggy and Christine Smith, the two women who helped start the famed Hebrides revival . They lived In Scotland on the Island of Lewis by in the village of Barvas. They were eighty-four and eighty-two years old. One sister blind and both too ill to go to church. They turned their home into their church. With a passion for revival on their island they clung to this verse:

“Isaiah 44:3a KJV
For I will pour water upon him that is thirsty, and floods upon the dry ground;”

they poured their hearts out to God day and night in prayer. One night in prayer God told Peggy that revival was coming. She immediately called for the Rev. James Murray MacKay, and told him what God had shown her.

Among those who were converted was the preacher, Duncan Campbell. He became a strong force being used of God for this revival.

One day Duncan was assisting at a service; the atmosphere was heavy and preaching difficult, so he sent to Barvas for some of the men to come and assist in prayer. They prayed, but the spiritual bondage persisted, so much so that half way through his address Duncan stopped preaching. Just then he noticed this boy, visibly moved, under deep burden for souls. He thought: “That boy is in touch with God and living nearer to the Savior than I am.” So leaning over the pulpit he said: “Donald, will you lead us in prayer?” The lad rose to his feet and in his prayer made reference to the fourth chapter of Revelation, which he had been reading that morning: “Oh God, I seem to be gazing through the open door. I see the Lamb in the midst of the Throne, with the keys of death and of hell at His girdle.” He began to weep; then lifting his eyes toward heaven, cried: “O God, there is power there, let it loose!” With the force of a hurricane the Spirit of God poured into the building and the floodgates of heaven opened. The church resembled a war zone. On one side many were prostrated over the seats weeping and sighing; on the other side some were affected by throwing their arms in the air in a rigid posture. They saw their sinful condition like never before. God had come! Revival overtook the island! Thousands were saved!

This revival became knows as the Hebrides Revival.

Mary Anne Smith MacLeod, niece of the two intercessors of the Hebrides Revival, cousin of Donald Smith the 15 year old converted at the revival emigrated from the Hebridean Island of Lewis, off the west coast of Scotland, from where she emigrated to America and met a gentleman named Frederick Trump.

Mary Anne Smith MacLeod would Marry frederick Trump and they would have a child Donald Trump,  who Mary would name after her cousin Donald Smith because of the impact he had in her through the revival.

God used two elderly sisters who desperately wanted to see God move in their church in a small fishing village on Lewis Island. Not only did the revival reach their Island in Scotland but the Hebrides Revival became known around the world. Little did they know that their nephew would one day become the 45th President of the United States of America. 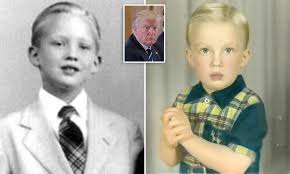 The Bible that Donald Trump has in the Oval Office is a Bible that his mother got from her two aunts, Peggy and Christine, then she gave it to her son, Donald. The Hebrides revival Bible.

What is God saying to America?

2 Chronicles 7:14 “If my people, which are called by my name, shall humble themselves, and pray, and seek my face, and turn from their wicked ways; then will I hear from heaven, and will forgive their sin, and will heal their land.”